What. A. Delight. Not in recent memory has a novel so tickled my enjoyment synapses (I’m not interested in knowing if such synapses actually exist. Spare me.). From page one, Patrick de Witt’s French Exit offers up the sardonic, the cheeky, the down right funny, and hits the reader with a full force of fun and playful, while also (probably) (definitely) exploring themes of …

Wait. What is this book actually about? If not about the fun and funny? It follows the fallen fortunes of Frances and Malcolm, tumbled from great wealth and esteem to a sort of poverty (I say sort of because they still manage to be in a fancy French apartment while faced with penury). Frances is a character in all the sense of the word, a sort of force of unflappable brilliance, and in watching her reconcile her vision of herself and her life with her newly arrived circumstances, I suppose we are meant to think through questions or morality and what makes for a good life. Maybe, too, whether it is the connections and relationships we foster that make any of it worthwhile. The founding of her friendship with Joan is one of the more delightful moments in an already incredibly charming book.

I’ll admit that where the book falls down is in its point, but on that I’m not particularly bothered. Like, I don’t mind that it skirts around big questions and instead lets Morality be morality, and Mortality, be mortality. Which is a way of saying there are ‘themes’ and ‘questions’ but the point of the book seems more to let the reader just. enjoy. reading. Through the whimsy and playfulness and fun of what Frances and Malcolm do, we’re allowed to appreciate with them the absurd and fanciful without always being bogged down with weighty questions. Ah. Perhaps there’s the rub. That as Frances and Malcolm too, have spent a lifetime avoiding anything Serious or Committed, we are given the luxury – not necessarily the wealth required for this particular luxury – of not thinking about very much, until we must think about it all.

Terrific writing – really: surprising, specific, not-showy-but-still-smart – and such. fun. Don’t come bickering with me later that it wasn’t about very much. I don’t care if you’ve forgotten how to just read because it feels good.

The Reason You’re Alive: Funny, smart, and a lot of fun

You don’t know that you know Matthew Quick’s work (or maybe you do, and if you do, congratulations and high five), but you do. He wrote Silver Linings Playbook, made famous for its adaptation to film. I’d not read anything by him before, but J. suggested I read his latest, The Reason You’re Alive, and she’s rarely wrong, so I did. And wham bam! What fun! Okay, fun might be a stretch when describing a novel that considers the lasting impact of the Vietnam war on veterans…

END_OF_DOCUMENT_TOKEN_TO_BE_REPLACED

I don’t believe in diets. In fact I’m pretty vocal about how ridiculous and counterproductive they are. Part of the reason is because of the fast-binge cycle: your body isn’t built for nutrient deprivation and so you get hungrier and hungrier until you find yourself crouched over the tub of icecream in the middle of the night wondering for what purpose you ever started out. END_OF_DOCUMENT_TOKEN_TO_BE_REPLACED

Heroes of the Frontier: Preview of Dave Eggers’ New Novel (That should have been a short story; Or scrapped) 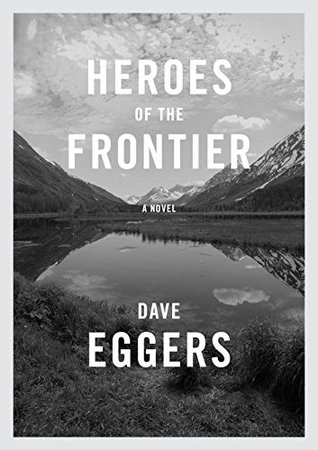 I am a Dave Eggers completist. I think because I really, really loved A Heartbreaking Work of Staggering Genius I keep reading everything he writes hoping to recapture the joy of that first read (why did I love AHWOSG so much? Probably because it was the first thing I’d read like it. A like every first encounter aren’t we all always trying to get back to recapture that moment of intoxicating newness?).

But with Heroes of the Frontier the fierce loyalty of fresh love has faded to embarrassment to be (seen as) still attached to the overly confident novel, unaware of its lackluster performance and reliant on the coattails of previous success. But I want to love Eggers, and so I read for kernels to warrant continued affection: Eggers writes good comedy. Josie, a former-dentist, has quasi-kidnapped her children and taken them into the wilds of Alaska so that she can find meaning. Some funny scenes ensue. Some smart writing.

But given the sole source of conflict in the novel is Josie’s uncertainty about whether her life has, or could have, or ever had, meaning (and whether children might be what we all pin our hopes on for meaning, but find never live up to those expectations), Eggers has a challenge in maintaining interest. There’s only so much hand wringing, soul searching while drinking wine and staring at the stars that one reader can tolerate. (Especially when it’s a reprieve, almost entirely, of the hand wringing of Your Fathers, Where Are They?) Which is to say the psychological conflict and drama doesn’t have enough complexity or resonance to do much but bore. Loathe as I am to suggest that short stories might have any merit at all, I have to say I think this 300 page beast of different campsites and highway driving could be suitably pared down to a couple of nights in a tent and the same realization: we make meaning in what we do and who we do it with, and it’s never going to come from money or things or external validation (alas).

The book hits shelves later in July. If you, like me, can’t resist Eggers (like you can’t resist Atwood), you know you’ll read it anyway, so go, read it, and let me know if I’ve gotten it all wrong. If you can resist the siren call, then go see the movie for A Hologram for the King and let that be your Eggers fix. Plus Tom Hanks. And let me know whether the movie is any good.