Mr Mac and Me: In Praise of the Small 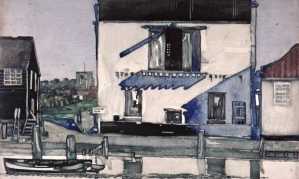 Esther Freud’s Mr Mac and Me sets out to tell the story of the impact of the beginning of the First World War on a British coastal village and the people who live there. Ranging from the introduction of blackout and rationing to the surveillance of ‘enemy aliens’ to grief in response to devastating casualties to the introduction of local building code restrictions the novel charts the pervasiveness of the changes. It does so beautifully, fully and quietly.

By focusing on the narrative of one – foot twisted – teenage boy, Thomas, the reader is offered a particular, if expansive, lens through which to view the depth and extent of the impact of the war. In the opening moments of the story Thomas befriends a tourist couple, Charles Rennie Mackintosh and Margaret MacDonald, who speak German and use binoculars to look at flowers (dangerous, indeed). [Not being much of an art follower I didn’t realize Mackintosh (the titular “Mac”) was a “real life” artist until doing a bit of reading beyond the text. Turns out he’s a big enough deal to have his own “society” and a number of proper biographies]. The collected experiences of Thomas and Mac are not grand or typically heroic, they are, instead, small and sincere (for instance Thomas borrows Mac’s binoculars in an attempt to save him from prison). Yet in the smallness of their story are woven the titanic changes of the time and the contours of total war: shifting gender roles, cataclysmic technological changes, xenophobia, state control of movement/habit and economy and the uncertainty of what is to come (I found this most impressive, that as we readers know how and when the war will end, Freud achieves the opacity of the future for her characters in a subtle, yet masterful, way).

The uncertainty of what is to come concludes the novel. I am, myself, uncertain about how I feel about the conclusion. Rather than spoil anything, I’d encourage you to read Mr Mac and Me and to let me know how you reacted to its ending and what you think it means for the power – and limits – of self-actualization and imagination.

2 responses to “Mr Mac and Me: In Praise of the Small”