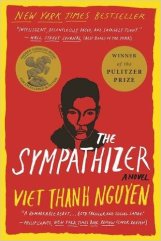 At trivia the other night I noted how much I wasn’t enjoying Viet Thanh Nguyen’s The Sympathizer and I was advised by my teammates to quit reading. There’s too little time and too many books, went the argument. But fresh on the heels of my failure to commit with Life After Life and my subsequent realization that it was fantastic, I was nervous that The Sympathizer would also turn out to be great. So I persisted. Add to that the buckets of critical acclaim (just look at the cover!) and positive reviews from all the people. I felt compelled to love it because if I didn’t… something is wrong with me as a reader

And that possibility is still there. OR it could be that the novel was boring. For instance it somehow manages to make a daring airplane escape from the fall of Saigon boring. Complete with hanging out of the back of the plane. What. is. wrong. with. me. Backing up: the novel opens in the closing days of the American occupation of Vietnam as the NLF is entering Saigon. Narrated by our unnamed protagonist, a once communist sleeper agent now prisoner, the novel is confessional in form and substance (including scenes of masturbation that would satisfy any Catholic priest). Our protagonist opens his confession with the acknowledgement that he is ‘half’ – neither Vietnamese nor European. This sense of ‘betweenness’ permeates his narrative as we witness his slippery allegiance to ideology as well.

I suppose it is masterful in rendering a nuanced portrait of the Vietnam war and its aftermath that does far more to complicate and humanize than any quasi-celebratory American narrative I’ve read (see my entries from 2011 when I read in the category “books set in Vietnam”).

So why was I bored? Putting aside the very real possibility that I am anot usually interested in psychological dramas (my reading of Crime and Punishment predates the blog but let me assure you my review now would be “just confess already”) and that as much as this book has plot – explosions! daring escapes! sexy escapades! – these plot moments are narrated after the fact and with a certain detachment that, for me anyway, neutralized their import. The plot sequencing also reads as episodic with moments of high drama and tension that do not necessarily follow one another and certainly do not compound in any way that suggests impending climax. The climax – as we might guess – is at once psychological and physical (re: torture). But again, likely as a consequence of narrative point of view, is disembodied in such a way as to pull back the urgency and emphasize the protracted (and disconnected) effect of bodily experience on conceptions of self and mind.

So sure. The book made me think about some things. And it presents a fresh narrative point of view. But all the same I just didn’t like it. And I’m very willing to see that as my deficiency and not that of the book. Because really. Pulitzer Prize.

2 responses to “The Sympathizer: I’m probably just bad at reading”