The Antagonist: What’s wrong with me? 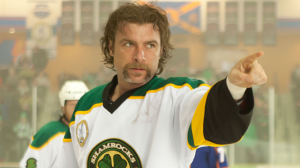 So why didn’t I like Lynn Coady’s The Antagonist? Short-listed for the Giller Prize in 2012 and named as one of the best books of the year by Canadian papers The Globe and Mail, The Toronto Star and even Amazon, it seems like everyone else thought/thinks this is a terrific read. Is it because I don’t care much about hockey (with the exception of gold medal games and stanley cup finals?) and the book is – on a surface level at least – about the violence engendered in the sport? Is it because the experiments with form – shifting from straight epistolary to metafictional commentary on the purpose of narrative – were neither subtle nor reflective of content (I reveal my bias here that I like formal play best, and perhaps only, when the form compliments or challenges the content)? Perhaps it was because the long delayed climax and been so overly built-up, so assured of its own cataclysmic significance,  that when it finally arrived I read it as anticlimax and disappointment: this is it? this is what he’s delayed telling us? this is the source of so much shame? Or maybe it was simply that the experience of the narrator – an experience far removed from my own – was not offered or rendered in a way that invited empathy or connection, such that the distance between his experience and mine felt like that – distance – rather than as an opportunity to inhabit the skin and experience of someone else and in so doing to change my perception and reactions.

With all these complaints I should say that the novel does carefully and fully explore the consequence(s) of using the stories of others for our own purposes: the ways we can exploit one another’s histories and stories for our advantage without intending to perhaps, but just by using the stories as adage rather than as the complex, idiosyncratic experiences that they are.

This is all to say that I didn’t enjoy The Antagonist but it may be more my fault than that of the novel. Or it may just be a case where I disagree with the critical reception. Convince me otherwise – I promise to exploit your comments.